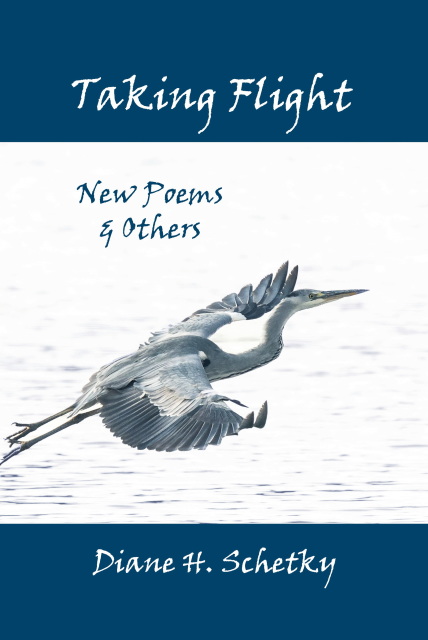 SKU: 978-1-944386-16-0
$16.95
$16.95
Unavailable
per item
Travel with poet Diane Schetky from the state of Maine that she calls home to the Arctic and even to inside lives of “Friends who have lost their way.” Taking Flight is a selection of poetry that will provoke a thoughtful journey companioned by a mindful guide.
2 available
Add to Cart
What people are saying:
Part travelogue, part nature diary, part empathetic portrait gallery, Diane Schetky’s Taking Flight leads us from the top of Mount Etna to the Arctic, from Java Indonesia to Maine, in poems that offer intimate reflections on life. A great blue heron that resembles a Giacometti; a language—Italian—where “consonants like to spoon/together in twosomes;” a vigil for the victims of Newtown where “silent sadness is broken/by the faint keening of a train”—these and other images bear witness to the world. Throughout, the poet follows her own advice: “Dig, dig, dig, until you unearth/your joys, sorrows, fears and passions.”
—Carl Little, author, lecturer and poet.
​Diane Schetky’s poems are filled with the observations of someone in love with the natural world, someone who listens and sees beyond what is on the surface. In Taking Flight, you’ll meet a river that becomes a traveling companion, experience a sense of place in countries you may never have visited, and meet people whose voices have been lost or silenced, as the author deftly bears witness to their stories through her poetry.
—Maggie Butler, MSW, Certified Amherst Writers & Artists Facilitator
About the poet: 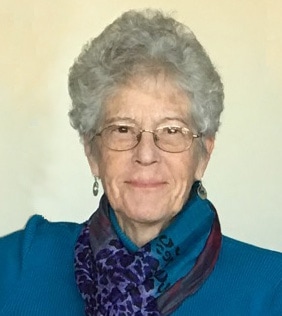 Diane H. Schetky
​As a youth, Diane H. Schetky dreamed of becoming a doctor. This led to her buckling down in college and she was graduated from Sarah Lawrence College where her focus was art. She was rejected by East Coast medical schools that were then wary of accepting women.
Fortunately, she was welcomed by progressive Case Western Reserve University School of Medicine. After getting her medical degree, she remained in Cleveland for seven years of post-graduate training in pediatrics, child and adult psychiatry. Her first job was at University of Oregon Health Sciences then she returned to her home state of Connecticut before moving to Rockport, Maine in 1986. She practiced child, adolescent and forensic psychiatry there until her retirement in 2007.
For the past five years she has lived in Topsham, Maine, and she summers in Phippsburg, Maine.
As a Hospice volunteer, for many years Schetky facilitated a bereavement group at Maine State Prison. She introduced the men in her groups to poetry as a means of dealing with loss. Inspired by their poems, she began writing her own.
She learned more about poetry while attending summer writing programs offered by her alma mater. Having written five books on forensic child psychiatry, she found much more satisfaction in writing poetry—its metaphors, whimsy and economy of words. She has published two books of poetry, Poems on Loss, Hope and Healing (2009) and Dancing Bear and other New Poems (2012). Her poems have been published in Off the Coast, Goose River Anthology, The Puckerbrush Review, The Maine Review, The Northern New England Review, The Aurorean and several psychiatric journals. Her poems reflect her love of adventure—traveling to seven continents and fifty countries—and her concerns about our endangered earth. Her writing is accessible, poignant, empathic and sometimes biting and sometimes humorous. When not traveling or writing, she enjoys serving as a docent at The Bowdoin College Arctic Peary Museum leading tours for children. She is a CHANS Hospice volunteer and facilitates bereavement groups. She also facilitates a writers’ group at the retirement community where she resides.